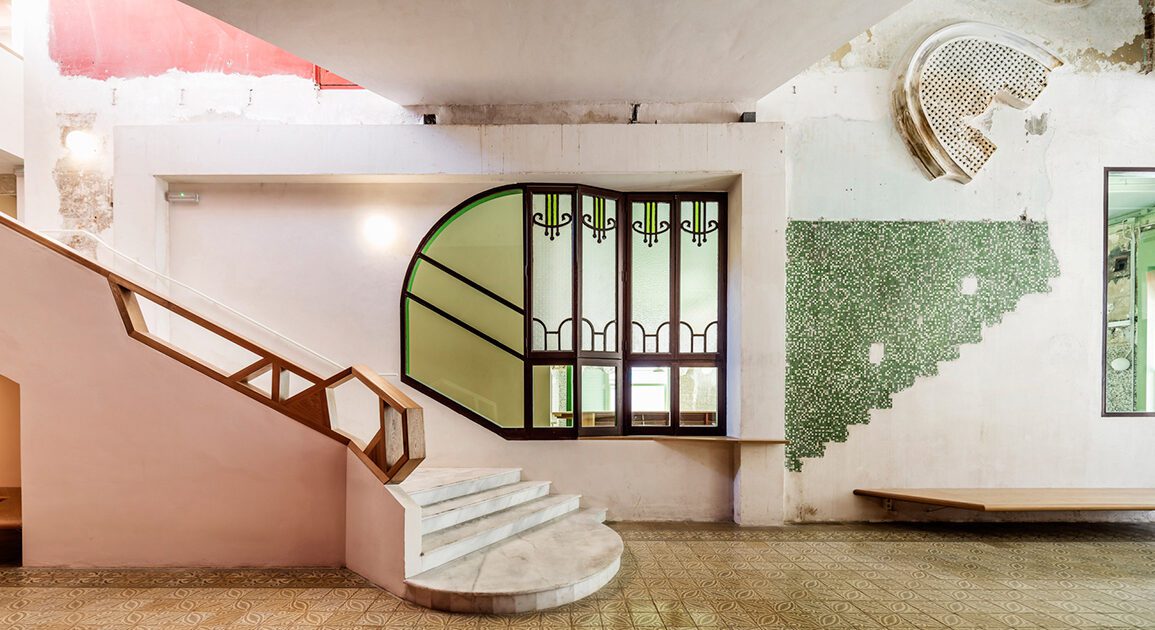 At the conference sustainable transformation 25. & 26. Oktober Ricardo Flores, founding partner of Flores & Prats, will present a series of projects of adaptive reuse, such as the Sala Beckett International Drama Center in Barcelona and the new Centre Variétés d’Expressions Citoyennes in Brussels, each one in its own way capable of opening a different dimension in the discipline of working with the existing.

What is your background? And how do you work with transformation on a daily basis?

I am an architect and have founded Flores & Prats Archs in 1998 in Barcelona together with Arch Eva Prats. We work in adaptive reuse projects in Spain and abroad since the beginning of our practice, through open competitions mainly for public clients. So, our research and learning about adaptive reuse has come through practice; we have learned by doing, building a focus and a personal position. By working with existing buildings, we have found open material from which to incorporate a future that counts on the past.

Later, we have brought these experiences and knowledge to the academy to share with the community of students and professors, teaching adaptive reuse studios at several schools but mainly at the school of architecture of Barcelona (ETSAB), and more recently at ETH in Zurich and Accademia di Architettura di Mendrisio.

What do you see as the biggest opportunities and challenges in connection with sustainable transformation?

For me one of the opportunities is that the abandoned condition in which we find these buildings allow many different ways to interpret and to read them, and then it is always so interesting to see what will spark the drawing that we do from what we find. We see sustainable transformation as a conversation with what we find, trying to understand the story of the place we inherit in a way that allows us to take good care of that inheritance.

Working in old buildings has something of being ‘second hand’, in places where you have not participated in their creation, where instead you can play the role of an observer. The work begins by observing… things that others have done. We observe by drawing, recording everything, what we like and what we don‘t… until it becomes our own drawing, our own project, which we begin to modify, adapting it to the new program. For us, the work in existing buildings starts from observation, stretching from what we find, amplifying its qualities. It is about transforming things into others, drawing everything as a continuous drawing (or thought). Dressing “second hand” means introducing yourself into a discipline of adaptation, and as architects, when we work with existing buildings to adapt them to a new use, there is something similar to the process of adapting a dress that has been used previously by others: you have to unstitch and recognize the pattern used before, cut on one side to extend on another, it may be that a new piece of fabric is needed, we may even have to add some pockets…. and so on until the garment identifies with and responds to the new user.

What do you think we should pay particular attention to when transforming existing buildings?

The adaptive reuse work always starts by observing the value of use of a building, the time contained in its materiality, by carrying out close observation of its qualities to be able to respond specifically to each place and context, to each story. During the observation, the project begins. We approach the building without a preconceived strategy, so observational thoughts mix with propositional thoughts; the process is a continuous reflection without clear sight of the direction from which a proposal will be built. This is an open attitude toward understanding and creating dialogue with what exists before deciding on any action on the building.

In any architectural project observation always plays an important role, but in the case of rehabilitation it becomes crucial. You look at what you see with what you know about the place, remembering and mixing your own memories, and this is why observation is always unique to each individual, as is exercising sensitivity and an ability to project ourselves on what we see, and a capacity to establish dialogue. Rehabilitation is an attitude of dialogue and continuity

with previous generations. While we observe, we slowly question ourselves about the possibilities of the recovery of what we have before us, constantly putting the building to the test through a program that we want to incorporate into it. The capacity of the existing building to be incorporated or not, to cede or not to the new program, will make it fully integrated at the end of the process, with all its memory and previous experiences added to the new uses and the people who have come to occupy it.

What will it take to accelerate sustainable construction and transformation in the next 10 years?

I think that at the moment we have the opportunity to work with the heritage from the second part of 20th Century, and this is something new that will change our work in the near future. There is a big amount of construction built in the 1970es and 1980es that is already obsolete in terms of programs but strong in terms of construction materials and structure, and I find extremely important that we do not go into demolition with them, with the huge impact in CO2 that this implies, but instead think in a clever way how to reuse and reoccupy these structures with new contemporary programs.

This is an opportunity to work on the heritage from previous generations, not as a burden, but rather an exercise of this discipline of working with the existing, allows us to join together previous efforts. The value that is given to a building at each different moment in history reflects the society that is looking at it. Buildings contain a physical and a social reality. It is not only people that contain the memory of a neighborhood; the buildings are also loaded with memories of the uses and lives that occupy them: the built fabric is the reflection of a social behavior. It speaks of a way of using the ground, the sky, of a way of inhabiting… To read the memory contained in buildings and in people is to think about a future that counts on that past. If we accept the right that each generation has to work with what they inherit and adapt it to the conditions of use of their time, we should also accept that the materiality and weight of its history, the physical and emotional reality of what is inherited, has the ability to resist “design attacks.” This forces us to work critically with the conditions we have found, to incorporate them until we reach a balance where the design actions are not new, but rather a modification of the as-found.

Which projects do you find exciting when it comes to sustainable transformation?

I think that the work of Lacaton & Vassal has opened a new way of seeing and doing things, and it is a strong reference for us. Their work at a historic landmark such as Palais de Tokyo in Paris, but also their renovation and reuse of a collective housing building from 1960es in Bordeaux show how to work with care with the memories and the emotions embedded in the existing.

Their work also shows that time is at the centre of our work. Working with time means adding the new use of the building to its previous lives, without the need to erase or prioritize one era over another, incorporating the temporal dimension not from nostalgia, but from memory. Drawing an existing building to get to know it is at the same time an exercise in making it one’s own. In that drawing, the different generations that built it are all expressed at once. Reuse opens the possibility of understanding the building as unfinished, as a work that incorporates stages from different times, in which your intervention will probably be followed by another. There is an understanding that our action on it will be part of an evolving activity that incorporates different actions in time. In the end, the building could be from any moment, but the exercise of reuse means seeing it with the eyes of the present: if they are still here, then they are part of the now.

Do you want to hear more about working with the existing?

At the conference Sustainable transformation 25. & 26. Oktober Ricardo Flores will present a series of projects of adaptive reuse each one in its own way capable of opening a different dimension in the discipline of working with the existing. Read more about the conference here and sign up here.